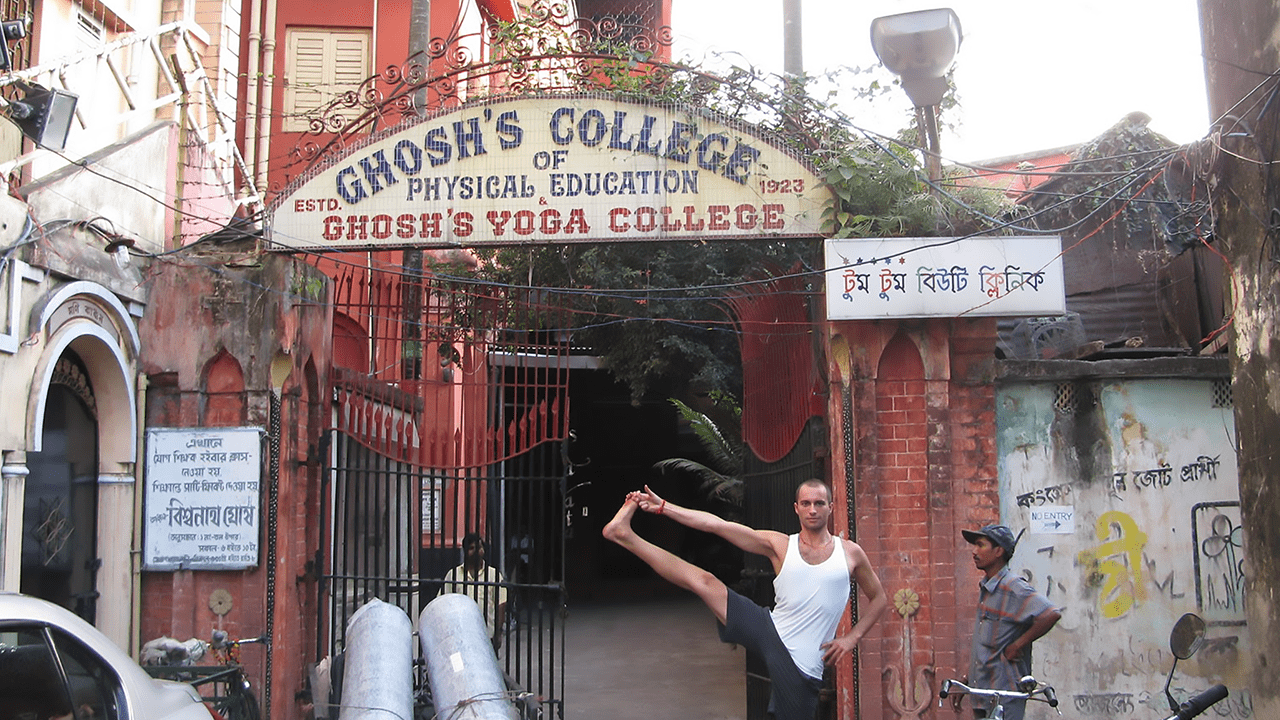 (1903–1970) Bishnu Ghosh was a Bengali bodybuilder and Hatha Yogi. He was a younger brother of the yogi Paramahansa Yogananda. In 1923 Bishnu founded the Ghosh College of Physical Education, Calcutta. He had a significant influence on the development of modern yoga, including by teaching yoga to Bikram Choudhury. Ghosh believed that the root of all disease is stress. He taught that the body’s energy centers around the spine, so spinal health is key to physical, emotional and mental health. Bishnu Ghosh would work one-on-one with a student, diagnosing the problem and developing a specific program to promote healing. His program was founded on the 84 yoga postures that his famous brother, Paramahansa Yogananda codified. Yogananda authored one of the most popular books on Yoga, The Autobiography of a Yogi and founded the Self- Realization Fellowship in Los Angeles. Bikram Choudhury credits Ghosh with helping him recover from a catastrophic injury through yoga asana practice. He combined weightlifting and bodybuilding with Hatha yoga practice to promote physical and mental wellness. Ghosh was known for performing feats of strength such as allowing a car to run across his chest and bending an iron bar into a coil.

Yogiraj Bikram Choudhury is the founder of the worldwide Yoga College of India™. Born in Calcutta in 1946, Bikram began Yoga at the age of four with Bishnu Ghosh, the younger brother of Paramahansa Yogananda (Author of the most popular book on Yoga, The Autobiography of a Yogi and founder of the Self- Realization Fellowship in Los Angeles). Bikram practiced Yoga at least four to six hours every day at Ghosh’s College of Physical Education in Calcutta. At the age of thirteen, he won the National India Yoga Championship. At seventeen, an injury to his knee during a weight-lifting accident brought the prediction from leading European doctors that he would never walk again.

Not accepting their pronouncement, he had himself carried back to Bishnu Ghosh’s school. He knew that if anyone could help to heal his knee, it was his teacher. Six months later, his knee had totally recovered. Ghosh was a celebrated physical culturist and the first to scientifically document Yoga’s ability to cure chronic physical ailments and heal the body. Bikram later popularized the 26 postures sequence, which works irrespective of age or physical ability. This 26 postures series has a profound healing power on your body and mind. He founded Bikram’s Yoga College of India.

Bikram Choudhury has lost significant standing in his own community in recent years. True Bikram Yoga values and promotes the extraordinary therapy that is the Bikram Original Hot Yoga Class. We are in no way affiliated with Bikram Choudhury, nor do we pay any fees or royalties to him or his organization. True Bikram Yoga is a female owned, independent small business. All the energy and resources you spend in the True Bikram Yoga community go to support the existence of this school and to assure your accessibility to this amazing practice.

(1893-1952) Paramahansa Yogananda, author of Autobiography of a Yogi, was the older brother of Bishnu Ghosh. In 1920 Yogananda came to the U.S to serve as India’s delegate to an international congress of religious leaders convening in Boston where he delivered his well-received address on the “Science of Religion.” In 1924, Yogananda established the international headquarters for the Self Realization Fellowship in order to disseminate worldwide his teachings on India’s ancient science and philosophy of Yoga and meditation. Yogananda emphasized the underlying unity of the world’s great religions and taught universally applicable methods for attaining direct personal experience of God. When Yogananda returned to India he instructed his younger brother, Bishnu Ghosh to go to America and teach Americans how to practice hatha yoga. Though American’s were enthusiastic about the new science of yoga, they could not begin to learn the techniques for proper meditation until they got their bodies into shape. Yogananda said that the body is a temple, but the Americans had not yet realized this. Their temple was empty. Bishnu Ghosh had to show them how to build up the body, the temple and fill it up before Yogananda’s teachings could be utilized.